The central question being addressed by the Goddard Center for Astrobiology is: Did delivery of exogenous organics and water enable the emergence and evolution of life? In short: Why is Earth wet and alive?

The approach being used to answer this central question includes an integrated program of (a) pan-spectral astronomical observations of comets, circumstellar disks, and exoplanet environments, (b) models of dynamical transport in the early Solar System, (c) laboratory studies of extraterrestrial material, and (d) realistic laboratory and numerical simulations of inaccessible cosmic environments. Synergistic integration of these areas is essential for testing whether delivery of the building blocks of life – exogenous water and prebiotic organics – enabled the emergence and development of the biosphere.

In recent decades it has become increasingly evident that certain types of asteroids and the even more primitive comets are rich in diverse classes of organic species. Moreover, comets/asteroids and their fragments are the only natural materials available to study actual prebiotic chemistry in detail, since plate tectonics on Earth has largely erased (or significantly altered) the prebiotic chemical record in the oldest terrestrial rocks. Decoding these icy and rocky bodies is critical.

Dense interstellar cloud cores are very cold (10-50 K), and their dust grains are coated with ices comprised of water and organic compounds. Many of these organics have potential relevance to the origin or early evolution of life, if delivered to planets. The survival of these organics through the violent birth-phase of a star is less certain. Properties of the young star (its mass, spectral energy distribution, whether it formed in isolation or as a multiple star, etc.) play a key role in controlling the evolution of organic material in the proto-planetary disk. The location within the disk is important since the nature and effectiveness of such processing depends strongly on distance from the young star, on distance above the nebular mid-plane, and on time.

The ultimate delivery of these organics to young planets and their moons also evolves with time, as the bodies grow in size and as the nebula clears. Since 2005, fundamental advances have changed our concept for transport and mixing of material within the protoplanetary disk of our Solar System, via gravitational scattering in the first billion years of Solar System evolution.

The major research objective of the Goddard team is to broadly establish sources of prebiotic organic compounds and to understand their history in terms of universal processes that are expected to take place on any newly formed planet. Toward this end, their research is organized as follows: Sections 1-4 test three major aspects of the hypothesized exogenous delivery:

What material was delivered? Can we sample this type of material, and establish its compositional diversity, including isotopic signatures in primitive bodies identified as plausible “carriers”? (Sections 1 & 3) How was prebiotic matter synthesized and processed in the solar nebula prior to being incorporated into such carriers? (Sections 2.1 & 2.2; and Sections 3 & 4) What dynamical mechanisms delivered these primitive bodies to early Earth, and can we find evidence for such processes through the study of forming extra-solar planetary systems? (Sections 2.3 – 2.5) Section 5 addresses selected key aspects of testing the habitability of other worlds, and thus testing the uniqueness of Earth as a habitable world:

Can we find evidence for habitability elsewhere in the present day Solar System (Section 5.1), and habitable environments in extra-solar planets (5.2)? Would this evidence inform the delivery of exogenous prebiotic matter to Earth? Section 6 addresses instrument protocols for future in situ investigations that extend our knowledge of the complexity of organic compounds on mission targets relevant to astrobiology. As applied to comets and asteroids, they will test directly our predictions and observations of organics synthesized and processed in the proto-solar nebula. As applied to Mars and the plumes of icy moons, they can quantify the presence and abundance of complex organics and informational polymers related to the origin of life.

The NAI Goddard team seeks to better understand which organic compounds are generated and destroyed in the interstellar and proto-planetary environments and later delivered to planets, through observational, theoretical, and laboratory work (Figure 1). 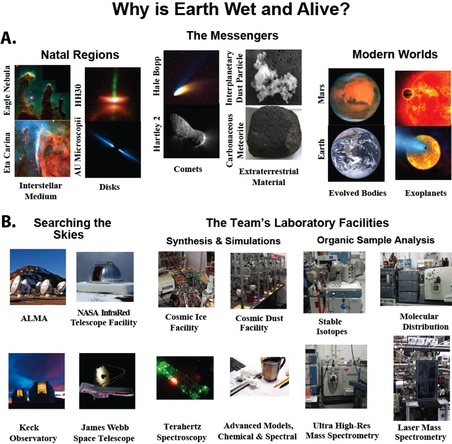